Copyright 2022 IREF Europe
Home » IREF’s Bestseller: “Why I am Going To Leave France”
Our edited publications 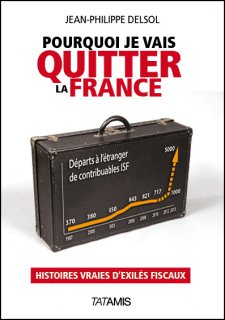 After publishing the real figures of the tax exile as part of the IREF research, this book tells the story of these exiles who are leaving not only for tax reasons, but also because they had enough with this France. A country where more than half of the population is living thanks to public money!

This book is written as a testimony from daily facts encounters by a tax lawyer, whose main activity is to support those who wish to leave France. Among them: industrial, retirees, entrepreneurs, young people, old people… This is an important part of the French wealth that goes … For the first time, a tax lawyer talks openly!

Read the book reviews in the English-speaking press:

The Telegraph:
– Half of France Active Workforce “Living Off State”

The Financial Post:
– More Than Half Working-Age French Live Off The State, Taw Lawyer Calculates

IREF Yearbook on Taxation in Europe 2012

What the Rich are Good For