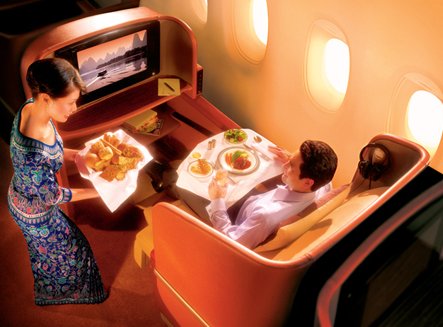 Cypriot government has unilaterally “redefined” one of the conditions of its 10bn bailout package and lifted a ban on government officials traveling business class. Is this an exercise in customary opulent luxury or is it actually a hidden subsidy? And aren’t all governments guilty?

The government of Cyprus received a bailout of €10 billion in March 2013 from the Eurozone and the IMF. Although Cypriot banks were seen as the main culprit of the financial woes, only about a quarter of the bail-out is aimed at bank recapitalization. The remaining three quarters are purely to rectify the Cypriot government’s fiscal health, with over 4 billion going to refinance past accumulated debt (estimated at 120% of GDP) and about 3.5 billion to cover yearly fiscal deficits for the next several years.
The money was not paid out in lump sum, it comes in regular tranches which are conditional on the receiving government adhering to a mutually agreed plan. One of the components of the Cypriot plan was a ban on all business class travel by government officials with the exception of the president and the chief of the Parliament. The ban did not apply to transatlantic travel.
Any document setting out promised reforms relies on certain common sense understanding of terms and words it uses. This is of course true of any legal document – something resembling a “complete contract” is neither feasible nor desirable.
Just over one year into the bailout programme, the Cypriot government announced this week that the ban is effectively lifted. Of course, this would be in violation of the agreed terms and would therefore immediately endanger the much needed next tranche of the bailout money. So a trick was used.

A new ocean is discovered

The deputy government spokesman Papadopoulos said that there was “an ambiguity in what the term ‘transatlantic’ meant” and therefore the government was now only clarifying it for everybody’s benefit. The new definition of “transatlantic” will henceforth be “five hours or more, including stopovers”, something for which another term is already reserved: a “long-haul flight”.
Any flight from the island of Cyprus must fly over the Mediterranean, and the Mediterranean is directly connected to the Atlantic Ocean, so perhaps it is even technically correct. Perhaps it is also just a coincidence that Cyprus Airways do not fly to Brussels, the likely most frequented city visited by Cypriot government officials, and that therefore all such flights now count as “transatlantic”. It is not for us to judge. What is certain is that this move does nothing to help sustainability of the fiscal recovery drive. The actual business flight expenses probably won’t be the straw that breaks the camel’s back, but its shadow effects will likely be much more pronounced.
Any fiscal recovery will only be successful (and will not turn to street rioting seen for example in Greece) if it has at least a notional support from the body that has to bear the brunt of the medicine: the electorate. The lifting of the popular ban squanders this “political capital” very irresponsibly.
The measure has a very large reputation effect. Not only will this make future lenders to Cyprus more cautious (and government’s borrowing more expensive) if lenders see that any condition is subject to later “redefinition”. Taxpayers themselves will be less willing to tolerate austerity if they see their representatives reinstating their vestiges of luxury. This seems like a lose-lose situation. The public is generally against the IMF bailout conditions, there were demonstrations and in February another necessarily component of the package – a law allowing privatizations – faced difficulties of popular discontent in the Parliament. And now the one part of the package which generally has public support seems to fall by the wayside, too.

EU pours oil onto the fire of expensive governmental travel

In the original ban on business travel, there was actually one more exception. You didn’t have to be the president to be able to fly business on taxpayers’ expense – all business class travel paid for by the EU was also exempt from the ban.
Paying for business class travel is not the only way in which EU “sets the bar” for what national government officials and civil servants expect. Difficult to believe why, but it also limits the airports from which you can get your plane tickets reimbursed. In 2011, for example, the Ryanair chief executive flew to Brussels on an invitation by the European Commission to speak on a conference on innovation. He booked the cheapest travel he could get. The Commission then told him that he could not get reimbursed since there was a ban on reimbursing “flights on low-cost airlines” [6’10” timestamp]. Anecdotal evidence seems to suggest that the practice of paying only for tickets of “national carriers” is widespread throughout also national government institutions in Europe.
Experience shows, however, that not using taxpayers’ money for an extra comfort can be a great winner of public support. So the British Prime Minister was able to win approval by the public when he (very publicly) flew on low-cost airlines during austerity, and the leader of the opposition was publicly scorned for going first class on a train – and then (not-)defending it rather awkwardly.

There may be another explanation, however, one which bodes equally badly for transparency and credibility of European fiscal policies. The reinstated business flights may be a form of artificial state subsidy to Cyprus airlines, one which is generally banned on a single European market. (In a similar vein, the Michael O’Leary’s episode may also be considered an undercover subsidy to large national carriers, even in economy.) The Cypriot national carrier is facing serious financial problems, it had to close its operations in Britain and exactly a year ago a “last push” to bail out the ailing airline was announced by the government. In January this year the finance minister announced that the “state support is over”, but perhaps it isn’t, after all.
How can it be over? After all, the government owns 94% stake in the company and at least some of its obligations are the same as those of any other European government: the pensions. Only in mid-May the government announced an extra EUR 4 million injection into the company’s pension fund. However, in a world of the unsustainable pay-as-you-go system pension systems of Europe, it is perhaps only an accounting trifle whether the government pays the money through a state company’s pension fund or out of the general taxation just like for everybody else. At any rate, financial problems pre-date the financial crisis (the airlines was “just about bankrupt” already at the start of 2008) and it wouldn’t be the first nationalised company in perpetual “near-bankruptcy”.
National governments support airlines indirectly through fiscal policies in other ways. Rules about company taxation allow companies to set off their travel costs against the tax bill, so implicitly governments add the corporate tax rate to the price of a business class ticket. If the corporate tax rate is 20%, business class tickets are 20% more expensive than they would have been otherwise; and so will the travel of government officials! No wonder that the business class travel is the most lucrative revenue source for the airlines.
Yet no government has to suffer from these overinflated prices it itself has created. The other side of over-charged business tickets are the under-charged economy tickets, which are cheaper than they would have to be if airlines were left without the subsidised business segment. All that a government has to do to avail itself of this subsidy is to fly economy. In a strange twist, then, government corporate taxation is forcing companies to subsidise (through the airlines) the travel of government officials… But that’s generally how any taxation works anyway.