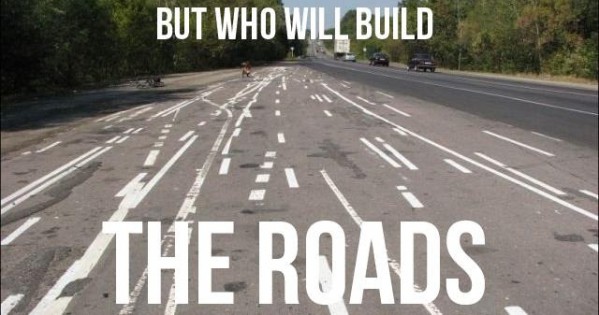 A century after privately built and operated roads were either nationalized or closed down, a new private toll road has sprung up in England. It is popular with drivers, if not with the local government. Is it always wrong to charge for use of infrastructure built from tax money? Is it OK that many EU countries start charging for highway mileage?

One of the oldest arguments in the book that justify levying taxes uses the argument of a so-called public good: while charging for use (and therefore construction) of roads may be feasible for main thoroughfares, it would be impractical for smaller roads, especially in cities, where you would have to (so goes the argument) pay a new toll at every street corner. To avoid such “transaction costs”, roads get built by the government, pretty much anyone (with a driving license) can use them, and the costs of building and maintaining them are financed from the general taxation.

Some European countries pretend that road construction is financed from a “special road development fund” funded by taxes imposed on owning and using vehicles. This is largely a myth, since there is generally no correlation between the size of the fund and the country’s road-building “needs”. In the rare year where more is collected, the revenue is used for other purposes.

Generally, extra “grants” to the fund are added from general taxation, always with some well-sounding justification to “increase mobility”. Many new EU entrants have had their road networks developed by tax money collected from incumbents, via various EU subsidies and development programmes.

Private initiative in road-building is either banned altogether, or more recently contained within a contrived “Public-Private Partnership”. This hasn’t always been so, “turnpikes” were a popular way of building privately built and maintained roads especially in English-speaking regions in past centuries. In the 19th century they’ve sometimes even seen a “bubble” of (over-)investment in wooden (!) roads, for example in Michigan, USA.

From research by economists Daniel B. Klein and John Majewski we know that government officials often played a role in encouraging the bubble, as a result of which many private fortunes were lost and capital misallocated. It is almost chilling to contemplate how similar the promoters’ arguments were to today’s EU road-building mania: “New roads would end rural isolation, speed [up] commerce, improve wives and daughters, increase church attendance, bring wealth”. The analogy is only perfect, of course, when we realize that nowadays the “places of worship” take the form of large roadside signs “Funded by the EU”. ..

… and in England they do again.

After more than a century without private toll roads, Britain has now had one for almost a month. When a landslide damaged a small section of a key road connecting the large cities of Bristol and Bath and the only possible detour added about an hour to commuters’ journey, a local entrepreneur (affected by the detour) leased the neighbouring field from its owner and built a by-pass around the affected section of the road. It cost him £150,000 and if on average at least 1000 cars per day pay him the £2 toll he charges before the year’s end (when the road is scheduled to be repaired), he’ll have covered his costs.

So far the positive response from drivers has been overwhelming, indicating that society is better off when some of its members pay one third of hourly minimum wage to save an hour of time and lots of unnecessary pollution.

The local authorities’ response was changing like the English weather. Reluctant at first, after the publicity it generated it presented a much more accommodating face, agreeing even to mention the toll-road’s existence on the official detour road signs.

But it would not be England it the ominous presence of “Health and Safety” regulations did not strike back. Living proof that the road to Hell is paved with good intentions, government’s regulations allegedly promoting public safety is a great constraint on private initiative. This applies also to cases where no taxpayers have been harmed in the building of a road. So far the road has not been shut down, but the council is investigating and “it is not amused”.

Indeed, the Health and Safety regulations hold such a choking grip that they forced the entrepreneur into subterfuge. He had to build the road and only then apply for a retroactive permission, knowing all too well that “compliance checks” would take so long that the original road would have long been repaired before any “preliminary permission” be granted.

The fact that people actually enjoy paying for the road may appear paradoxical. But when presented with the fruits of private initiative, everyone realizes that it costs real money to build a road or a bridge. What people do mind is the government pretending that all roads are free, paid out of the bottomless pit called “state money”, and then all of a sudden having the gall to charge extra at some bridges or even roads.

But even that may be justified, under certain circumstances.

When a motorist is asked to pay a toll on a road or bridge that had been paid out of taxation (general or road taxes), it does not mean that she is unfairly paying for the bridge “twice”. Toll charging may even be more efficient way of paying for infrastructure than purely from taxes: since it is at least partly paid for by those who use the infrastructure, it resembles a simple payment for service.

If infrastructure is paid purely out of taxation, people have to pay for it even when they get no direct benefit from it. Paying for it through toll means that they are also voting (with their money) about where infrastructure should be built and perhaps even multiplied. In national elections people tend to vote on multitude issues and not necessarily on what roads should be paid.

At least two additional benefits may accrue when governments charge for roads – provided that certain conditions are met.

Traditional argument against levying tolls for government-built roads and bridges points to the high costs of collecting such tolls, both in collector manpower and in lost time. But digital technology puts an end to this argument. Time costs for motorists then go to zero and manpower of toll collectors is replaced with a technology investment. That may still be costly, but the prospects are positive: we increasingly live in a world with stuff cheap, people expensive.

Some EU countries offer free use of their governmental highways, some charge a fixed fee (through a vehicle vignette), some charge per-use. There is now a trend to move towards a digital pay-per-use. Almost all countries have introduced it for freight transport, and are about to introduce it also for personal transport.

Charging for road use has the chance of making government provision of goods and services more efficient – but only if other taxes fall as a result. Otherwise road tolls are just another form of hidden increased taxation.