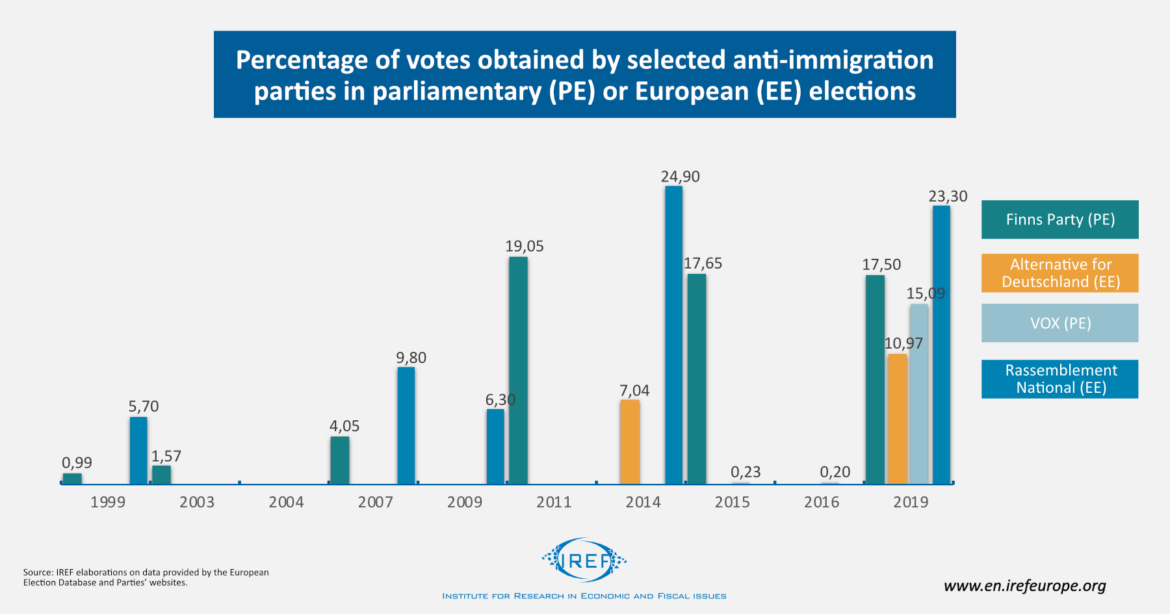 As shown in Peter Higgins’ book “Immigration Justice”, two distinct positions dominate the immigration debate. The nationalist position assumes that states should favor the interests of their own citizens over those of foreigners. By contrast, the cosmopolitan position claims that residents are entitled to no privileges.

With regard to the first camp, some nationalists believe that immigration is on balance harmful, while others maintain that immigration is fruitful. The British policy allowing unrestricted inflows of scientists and entrepreneurs, while applying strict criteria when deciding whether to admit other categories of individuals, is definitely nationalist. But the same is true for other policy proposals that favor immigration because it would help to stop the demographic decline in the West, or would supply domestic producers with cheap labour. The nationalist stance is pervasive, as the following sentence drawn from the Eurostat website demonstrates: «In destination countries, international migration may be used as a tool to solve specific labour market shortages [our emphasis]. However, migration alone will almost certainly not reverse the ongoing trend of population ageing experienced in many parts of the EU».

In contrast with the common perception, however, the cosmopolitan perspective is not always in favour of unrestricted migration. For example, some cosmopolitan advocates have argued that the absence of immigration restrictions could harm developing countries. First, because the ability to migrate to other countries requires resources that, for the most part, only privileged individuals have. Under such circumstances, large-scale emigration would imply a brain-drain effect. Second, because those who can move often find harsh conditions in the country of destination, especially insofar as the migrants belong to social groups that are already disadvantaged in the receiving country (e.g. women).

Selective immigration is an appealing solution. As mentioned above, Britain allows unlimited inflows of scientists and entrepreneurs, while it applies strict criteria when deciding whether to admit other categories of individuals. This is consistent with the views expressed in the White Paper on UK’s future skill-based immigration system, presented to the British Parliament in December 2018. It is a matter of debate whether shopping among immigrants is a form of discrimination that respects the fundamental values of liberal societies, especially when immigrants come from countries where fundamental rights and liberties are violated. Certainly, this kind of selection requires that a country be in full control of the immigration flows, which in turn requires some sort of effective separation from countries implementing softer discrimination. As Theresa May suggested in the white paper mentioned above, « As we leave the European Union, free movement will end. For the first time in decades, it will be the democratically elected representatives of the British people who choose who comes into our country».

The unavoidable consequence of choosing who has the right to come into the country is that disadvantaged countries lose the most qualified portion of their population, and this may reinforce tendencies to migrate.

Another aspect regards the carrying capacity of the host countries. In other words, their ability to accept immigrants without prejudice to the political stability is limited.

In ecology, the carrying capacity is the ability of natural ecosystems to sustain population growth without prejudice to the environment, given needs and resources. This concept has been widely used in the studies concerning immigration, even if sometimes inappropriately. We use this very concept in a rather different form, to determine how many immigrants an area can cope with, given its economic and social resources, without stoking political tension.

The tensions among European governments that have followed the recent migrant crises, as well as the recent burst of anti-immigration parties across Europe, suggest that the European carrying capacity might be approaching its limits.

Before 2007, i.e. before the Great recession, voters’ consensus for the anti-immigration parties was modest. This is shown in the first figure, which also describes the growth in consensus these parties experienced in selected European countries over the last twenty years, along with the rise in the share of foreign-born population over the total. 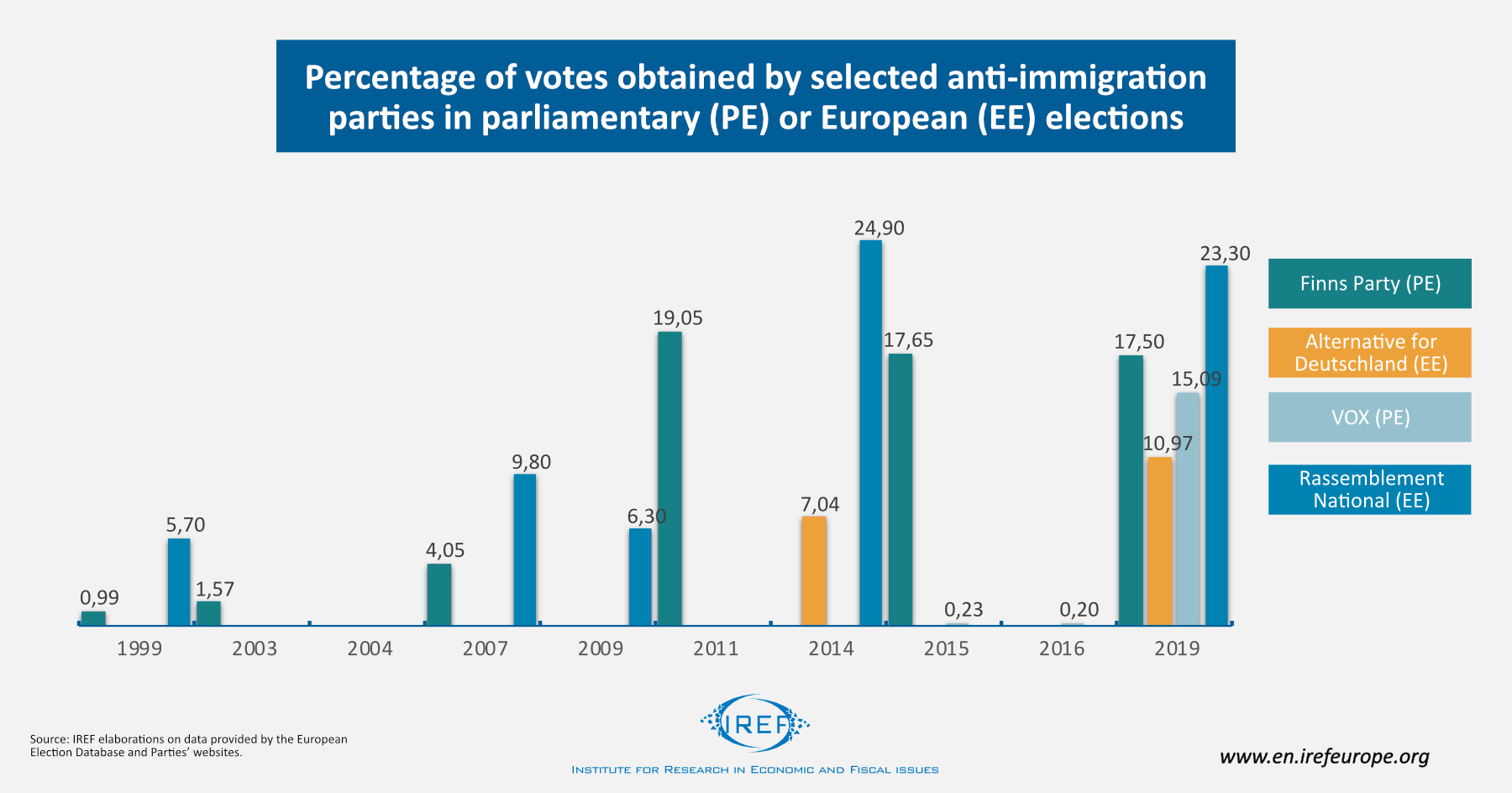 Things have been changing since 2007. As an example, consider Finland’s Finns Party. It started combining the idea of the welfare state – from which non-Finnish citizens would be excluded – with anti-immigrant feelings, and ended with a call to consider immigration a source of evil (the Finns Party was the second most voted party at the 2019 general election, just below the Social Democratic Party). 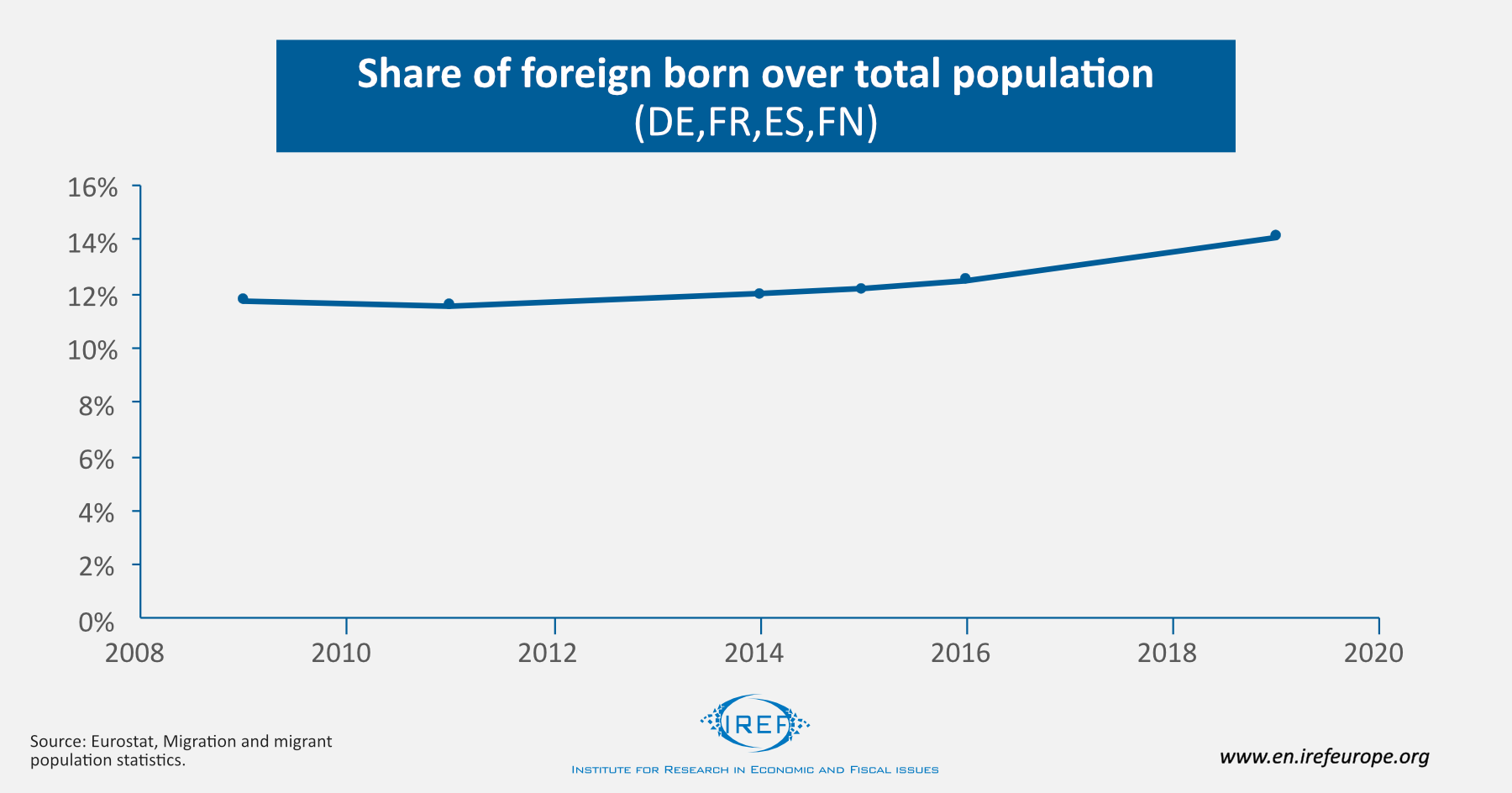 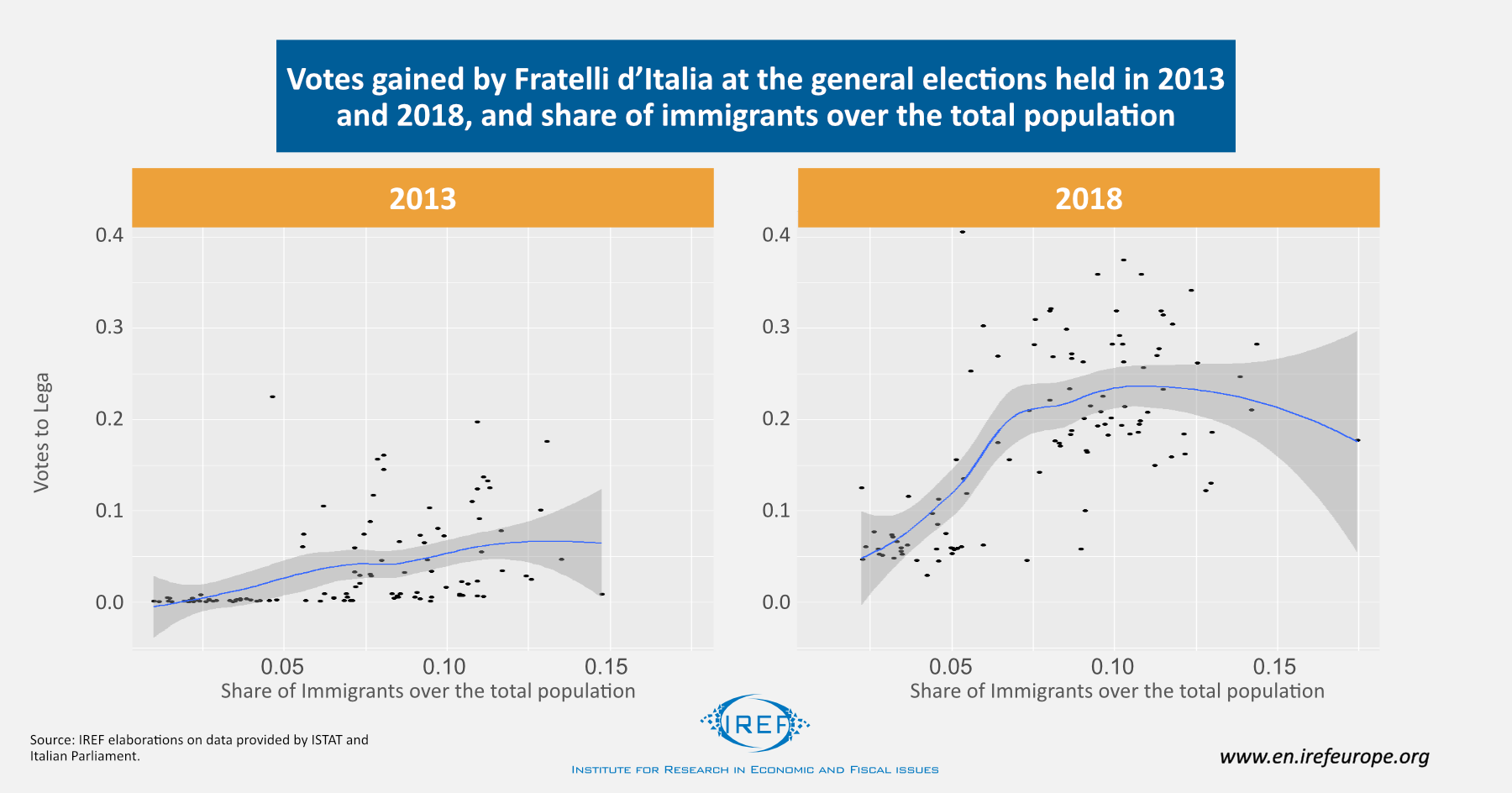 In particular, the votes gained in any given province turned out to be positively and strongly correlated with the presence of immigrants. 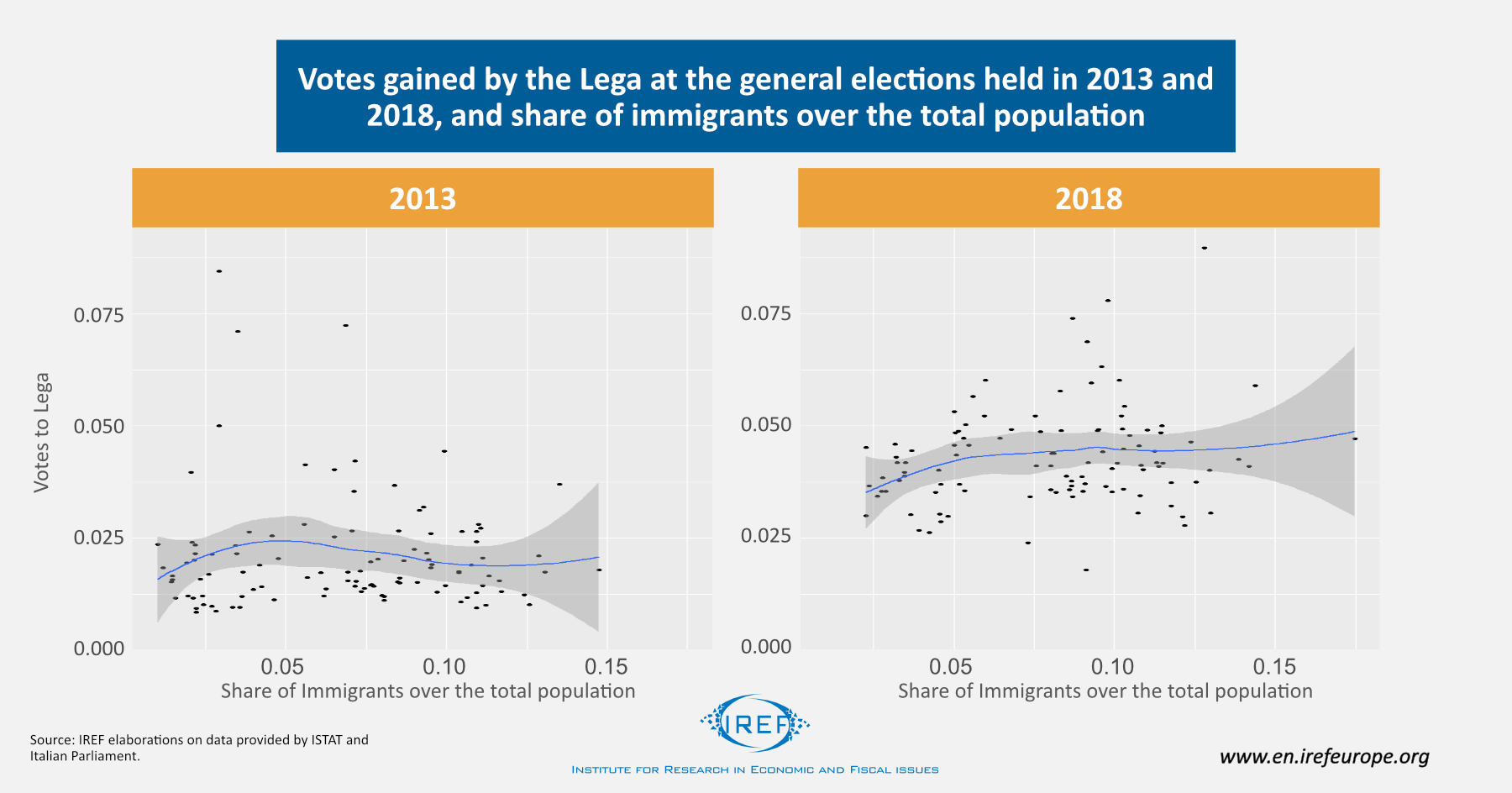 Further statistical tests (not shown here) suggest that neither the rate of unemployment (or other labour market indicators, such as the rate of inactivity), nor the incidence of crimes, explain the success of these parties. The number of votes does not seem to depend on the share of crimes committed by immigrants either. Rather, it seems to be correlated with the average age of the resident population. In bad times, older people feel more insecure. This is why the Lega did so well in provinces with older populations and higher shares of resident immigrants.

A matter of ignorance (too)

There is no simple recipe to cope with the problem of immigration. Some scholars even suggest that Western governments should apply distinct immigration criteria to different countries of origin.

Reason and common sense will determine whether the problem will be solved and tensions kept under control. Regrettably, they are both in short supply. In this light, it is worth paying attention to a few basic issues.
First: immigration flows must be regulated in accord with the carrying capacity of the host countries, and must therefore be managed with prudence. This is to prevent extremist parties from building their success on the rhetoric of alien invasion.

Second: in contrast with the anti-immigration narrative, we must be aware that most immigrants would indeed prefer to stay in their own countries, if living conditions were acceptable. In fact, many areas in Africa and the Middle-East are devastated by war. Europe and the US should work harder to ensure peace in those areas, a precondition for the functioning of the markets and economic development. As Higgins argued in his book, a critical point is that receiving countries «do not simply respond passively to naturally occurring migration flows»; they are part of their problem.

Third, ignorance is pervasive and must be reduced. Many Westerners know little or nothing about the countries of origin of the immigrants, nor do they know about their culture. Ignorance generates fear. Fear is not quite the right sentiment upon which a free society should be built. 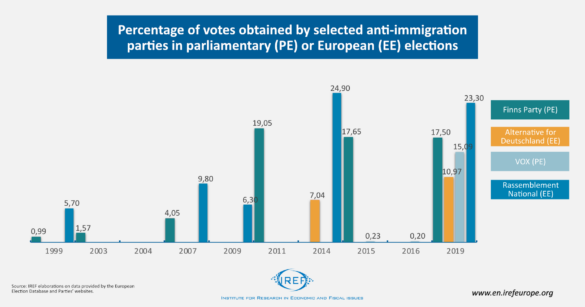 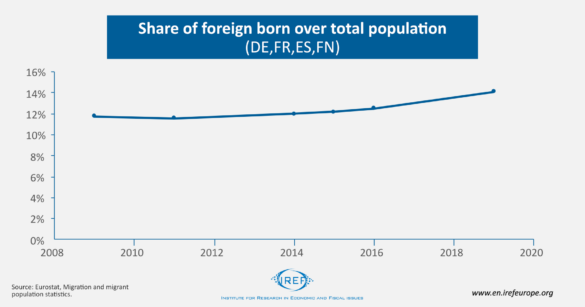 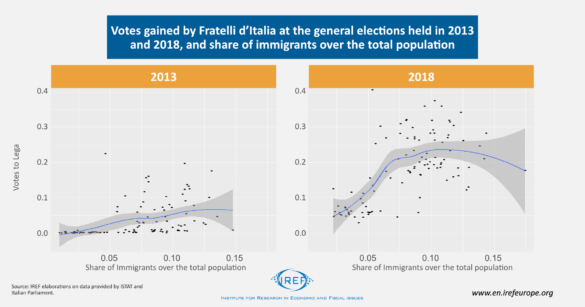 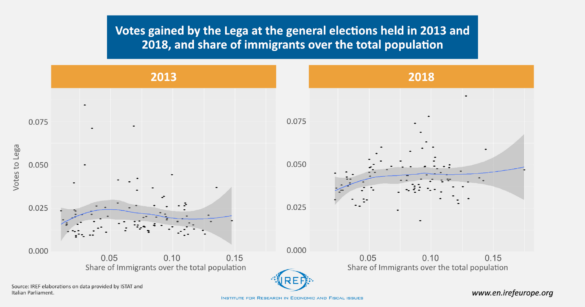