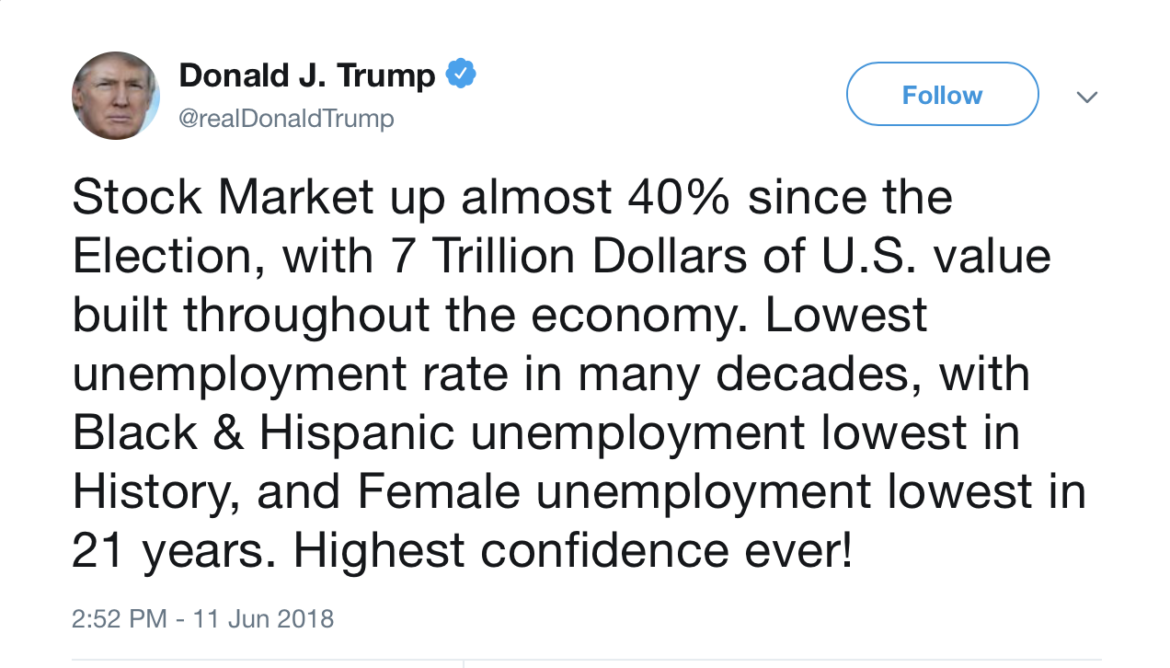 US President Donald Trump’s (in)famous tweet-storms have been used as anecdotal evidence of his volatility, anger, etc., but they are also an important source of policy information. After all, it has been repeatedly noted how Trump uses social media, particularly Twitter, as a way of addressing his constituency directly. This allows him to work around the mainstream press system he hates and express his true political views on several matters. Studying Trump’s tweets is therefore an exercise that deserves attention. To this aim, we have resorted to Twitter’s Application Program Interface (API) and collected all his tweets – over 3,000 in total (see Figure 1) — posted from the official account of Donald Trump (@realDonaldTrump) in the last 12 months, until the day before the Midterm elections (i.e., since early November 2017 up to the 5th of November 2018).

In particular, we have tried to identify the main topics discussed by the US President in his tweets by making use of an algorithm that recognizes the main arguments in a set of documents (in our case, the tweets by President Trump) by focusing on the patterns of words present in each document and across documents. By applying this type of approach in the case under study here, we were able to recover the 10 main topics reported in Figure 2. It appears that Trump’s preferred topics are national and religious celebrations, such as Christmas, Pearl Harbor, and Memorial Day, which are followed by the economy, which is the top policy issue discussed by the US President in the last year. Other frequently mentioned topics are the include the alleged Russian hacking and the critiques to the “fake news”.

It is also interesting to highlight the presence of positive correlations across the ten arguments as reported in Figure 3. In fact, Trump seems inclined to linking his discussion about the economy with foreign-policy issues – for example, the role played by the call for “fair trade”. This can be seen by looking at the edge connecting the topic of economy with the foreign policy topic as reported in the network of Figure 3. The same applies to the Media and Russia, as well as to Legislation and Immigration. In the latter case, in particular, the positive correlation appears to be the strongest one (see the thicker line connecting these last two topics). 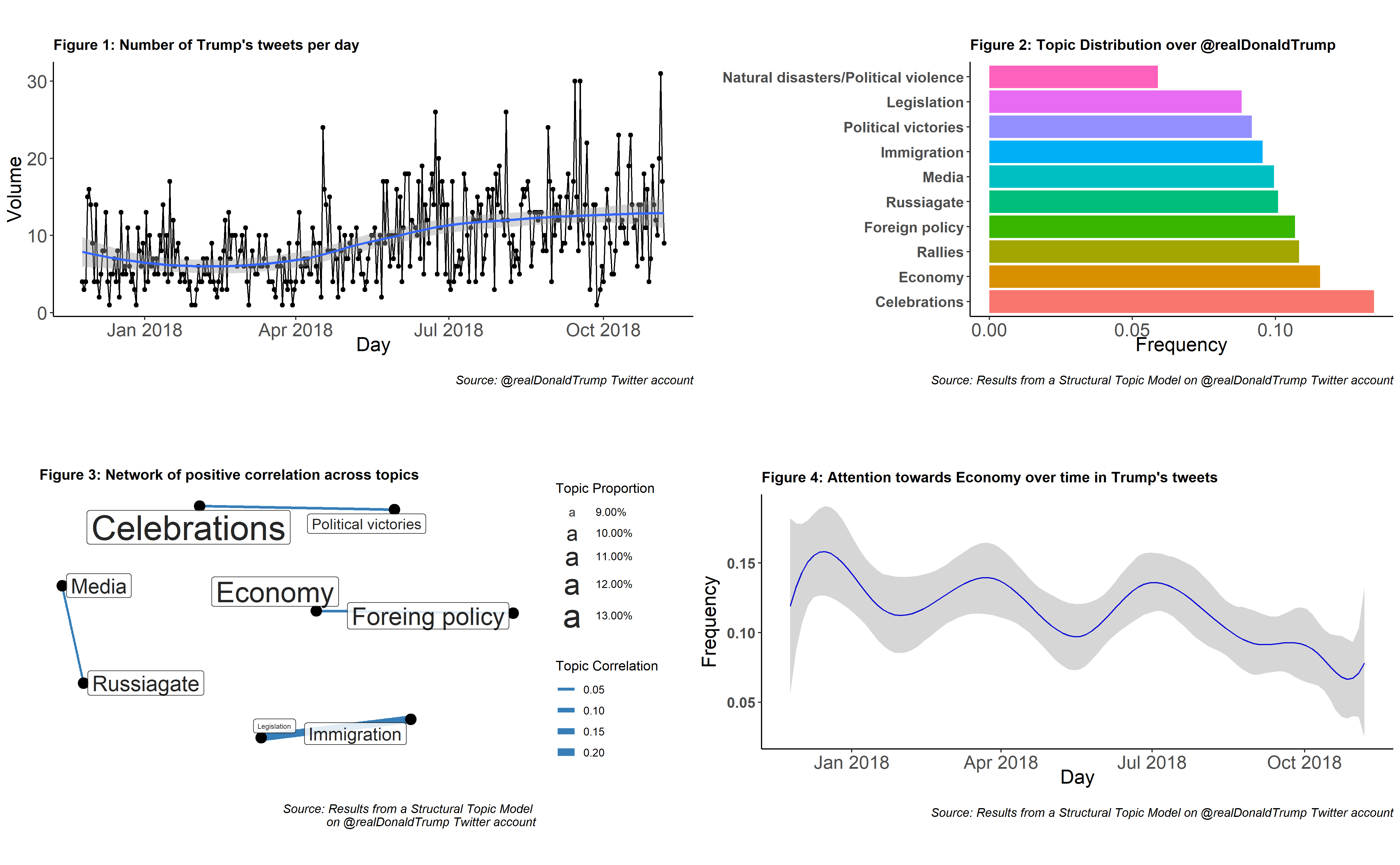 If we focus on the set of tweets dealing mainly with economic matters, some remarkable results emerge. First, we witness a decrease in Trump’s interest toward this topic over time, albeit with some ups and downs (see Figure 4). For example, at the end of 2017, the frequency according to which Trump was discussing about economy reached 0.15 (i.e., out of 100 tweets, 15 were dealing with economy). This frequency has now dropped to less than 0.1.

What about Trump’s pro-market attitude? In this regard, we take advantage of the method proposed in a well-known article by Michael Laver and John Garry, who developed a “dictionary” to assess the policy positions of political actors by screening their speeches and written documents through sets of key words. In our case, we have selected words related to the pro-state side of the ideological spectrum (such as benefits, care, etc.) and words that reflect a pro-market position (such as taxes, profitable, privatizations, etc.). Then, we have compared the relative frequencies according to which these two sets of words appear in the tweets published by Donald Trump in order to evaluate his economic position. We report the results in Figure 5. We also superimpose a line that illustrates a “neutral” position: values below such line reveal a pro-state view, while the opposite applies to values above the line. On average, Trump’s economic position is indeed pro-market. Yet, there have been frequent exceptions, making Trump an uncharacteristic Republican President on economic as well as other matters. This is evident in Figure 6, where we compare the economic position of Trump with that characterizing other American well-known political figures, such as Nancy Pelosi, Bernie Sanders, Ted Cruz and Rand Paul. As expected, the libertarian-republican Rand Paul turns out to be the pro-market champion, followed by Ted Cruz. Donald Trump comes third. Interestingly, this last figure confirms the huge polarization of the current US political climate, with the Democrats (e.g., Pelosi and Sanders) far away from their Republican counterparts. 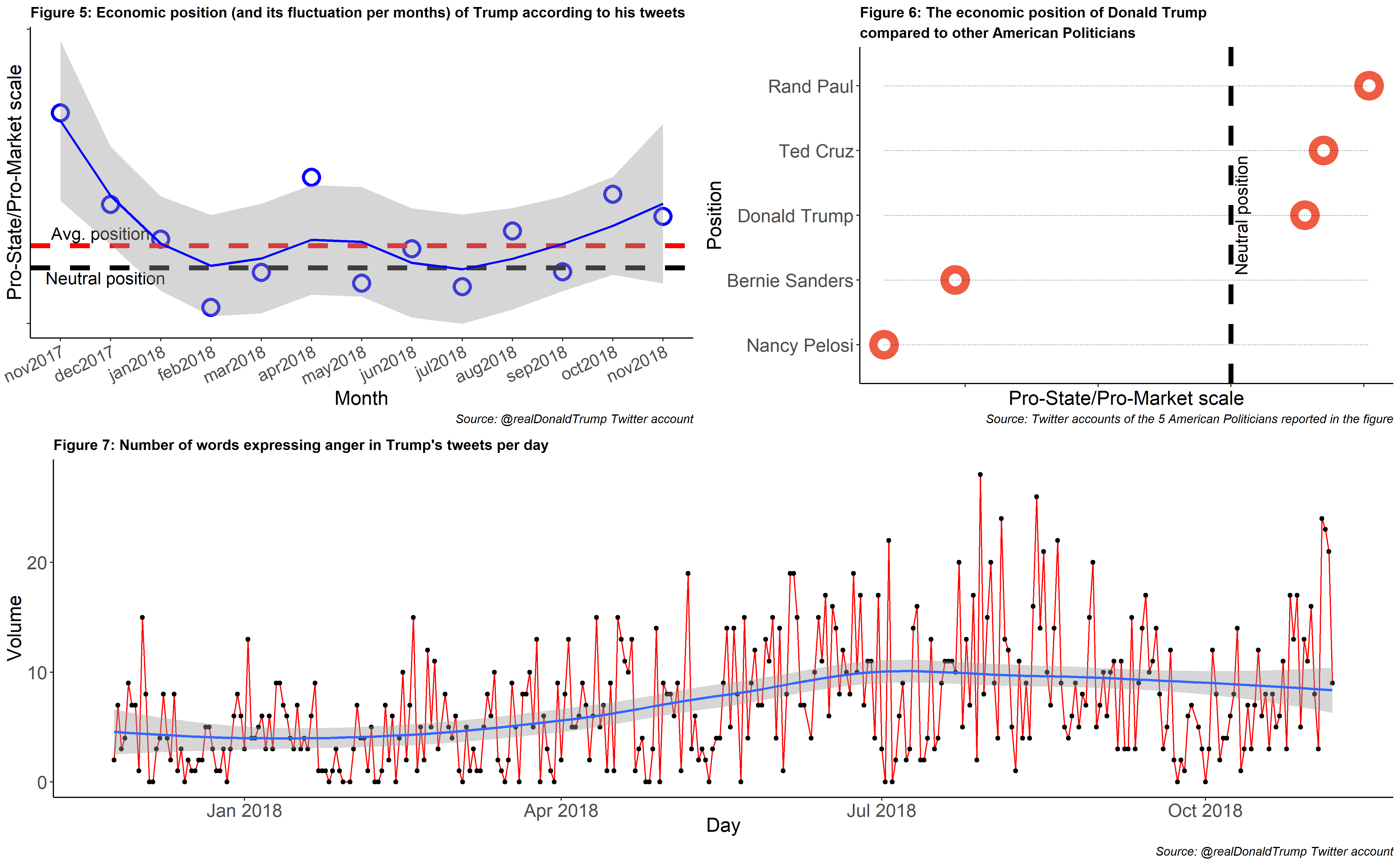 Finally, we have also analyzed the type of emotions expressed by Trump in his economic tweets. It appears that if Trump talked about the economy and just the economy, his famous anger would magically vanish: the data show that the more Trump talks about the economy, the less he expresses emotions such as fear, disgust and resentment. Of course, our “if” is a big “if”, since most President Trump’s tweets are not limited to the economy. In fact, the number of “angry” words in his tweets, which according to several sources are quite appealing at least to a part of his constituency, appear to have slightly increased over time (see Figure 7). Not surprisingly, this coincides with the lower attention devoted by Trump to economic issues, and with a growing salience played by other topics. In this context, “political rallies” has experienced a significant jump as the Midterm elections were approaching. The bottom line is the following: unless an economic shock takes place, do not expect a decline in Trump’s anger on Twitter (and elsewhere) any time before the 2020 Presidential race. 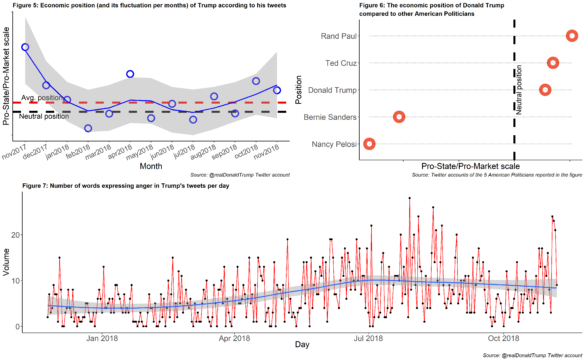 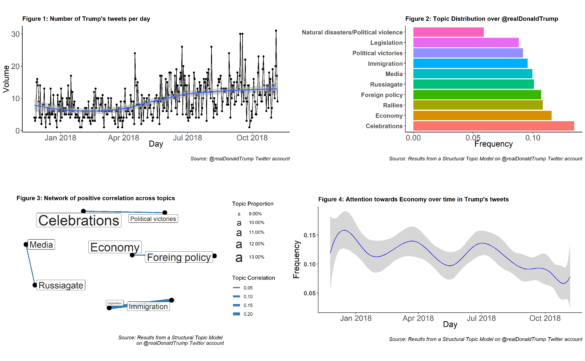