Copyright 2022 IREF Europe
Home » The Riddle of Populism and Ideological Polarization: the Difficulty to Live Without Both
Online Articles

The literature has put forward two main arguments to explain the recent rise of populist parties and their electoral success. On the one hand, commentators have highlighted the rising level of uncertainty about the economy and grievances among the losers in global markets. Resentment, it is argued, has been susceptible to the anti-establishment message of populist movements and parties that blames ‘Them’ for taking away from “Us” prosperity, job opportunities, and public services from ‘Us’. On the other hand, authors have emphasised the role of culture and the backlash against long-term shifts in progressive and liberal social values. Such cultural backlash is especially strong among the older generation and less educated people, who suffer the displacement of familiar traditional norms and the rapid cultural changes that seem to be eroding the basic values and customs of Western societies. Other external shocks – such as the massive recent increase in immigration – are related to both explanations. Immigrants ‘compete’ against native low-wage, unskilled workers, and at the same time bring with them new values and behaviours that may be source of tensions with the residents in the destination countries.

I do not deny the role of these variables in explaining the success of populist parties. However, when focusing on the choice to adopt a ‘populist rhetoric’ in political confrontation, it is also important to highlight the rhetoric that characterizes the leaders of the populist parties. In this respect, ideology is a major driver. The intuition is straightforward. When parties are close to one another, praising one’s own policy position or criticizing the position of the rival parties is a dangerous exercise, and could backfire. Since the positions are similar, voters find it difficult to tell the differences across the various parties. Thus, parties prefer to select other ways of differentiating themselves in the eyes of the electorate. The rhetoric against the elites is an option. Anti-elitism can be valued positively by a broad class of voters across ideological lines, and this feature makes it particularly appealing. By contrast, when parties are ideologically distant from one another, the opportunity (and the incentives) to invest first and foremost in anti-elitism is expected to decrease when compared to other (policy) issues.

The figures below show the relationship between three different measures of populism and the level of ideological polarization (estimated as the standard deviation of parties’ positions along the left to right economic scale) in several democratic countries according to a very recent dataset based on an expert-survey. Figure 1 describes the percentage of populist parties in each country. Figure 2 illustrates the average appeal to populist rhetoric within a national party-system (from 0 – strongly favors pluralist rhetoric; to 10 – strongly favors populist rhetoric). Finally, Figure 3 shows the average importance of populist rhetoric within a national party-system compared to other issues (from 0 – no importance; to 10 – very important). 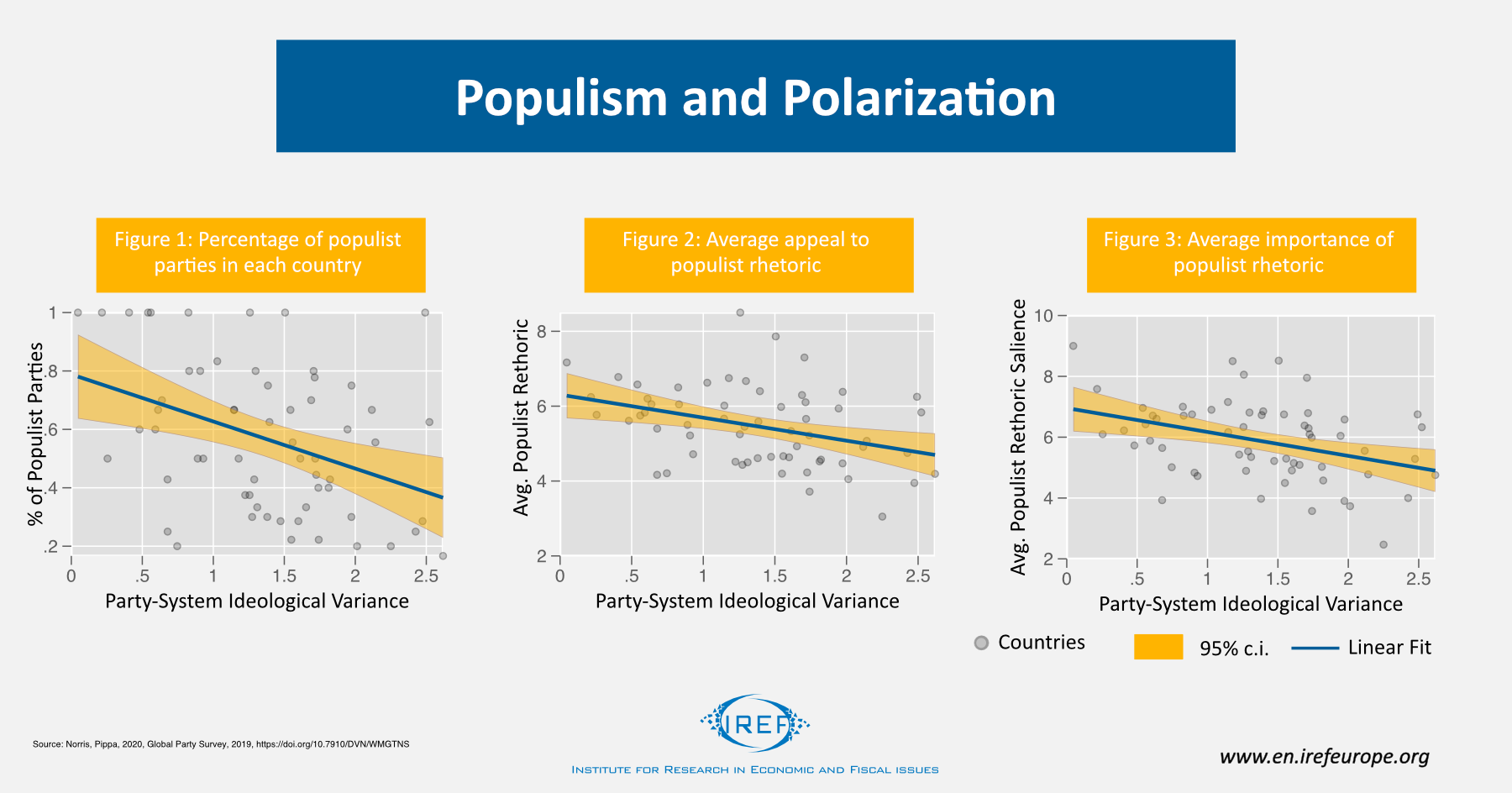 The important point is that the ideological temptation to adopting populist rhetoric is more pressing nowadays than in the past. With the demise of the Cold War, the acceleration of the process of European integration and growing globalization, parties appear to have become ideologically closer to each other over time (at least compared to the past). In this regard, figure below shows the evolution – once again in democratic systems only – of another measure of party-system ideological polarization. In this case, I focus on the general left-to-right parties’ positions as they result from the analysis of their electoral manifestoes — see Comparative Manifesto Dataset. The trend features a steady increase, especially since the end of the 80s. 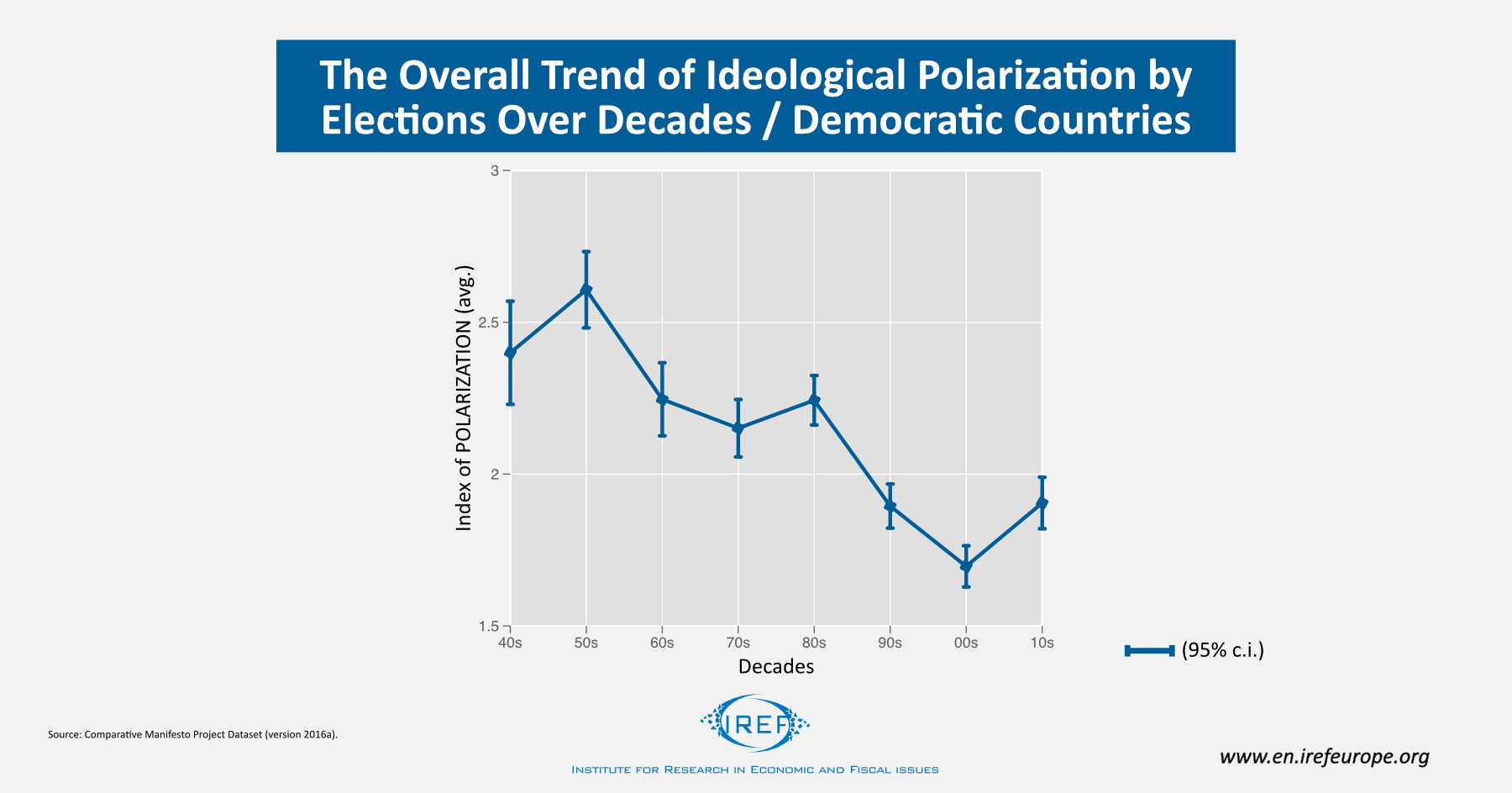 If the ideological conditions illustrated above do not change in the near future, the incentives to rely on a ‘populist strategy’ will stay, regardless of the possible extemporaneous reasons that explain today’s success of the populist parties. In other words, effectively managing immigration or solving the economic problems in Western democracies may not be enough to stop the ideological incentive to ‘play populist’.

A strong ideological revival in party politics could perhaps change the picture. Yet, given the declining appeal of the grand narratives of the past, this possibility seems remote. In other words, it seems unlikely that parties – at least the mainstream ones – will discover some key issue leading to policy polarization. Per se, this is not necessarily bad news, of course. Suffice it to recall that in the past polarizing questions of class, race or religion have frequently led to violence. Nevertheless, in the absence of a renewed ideological revival, the current dynamic will unlikely disappear. Analyzing the possible consequences for democratic life is an appealing agenda for future research.