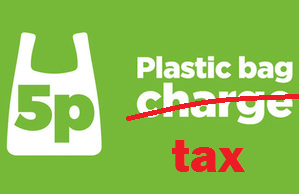 At the beginning of October, England became the last constituent part of the United Kingdom to introduce a compulsory charge for plastic shopping bags (to be paid by the shopper), after similar taxes had been introduced in Scotland, Wales and Northern Ireland in previous years. The relevant ministry insists that it is not a tax since “the money from the charge does not go to the government“.

We show that
A) it actually is a tax, in spite of government protestations,
B) its complexity is costly misdirected, and
C) instead of improving the environment, the tax may actually worsen it.

A) A tax by any other name

A tax is a compulsory payment to a government which creates no specific right to a service (unlike an entry fee to a local government’s swimming pool, for example).

The new act may fulfil this definition directly: the payers receive nothing directly in return. Not even if the scheme actually raises some money. And not even that is certain – the new law allows retailers to deduct the full costs of running the scheme and this may be a substantial part of the money eventually collected.

What is left over should be “donated to good causes”, but this does not have to mean charities! Such free money without well-defined purpose only encourages corruption as various “causes” lobby to receive it (including for-profit enterprises). And even if it does go to environmental causes, the government’s claim that the money does not arrive in its coffers is not true. Environmental causes are a popular spending chapter with contemporary governments, so any money that the retailers will forcefully spend there will free up some resources the government was otherwise planning to spend there. Then the government will have more money (revenue) to spend on other things. The difference in accounting is purely cosmetic, perhaps even with the nefarious aim to make government redistribution look smaller in size.

An apt analogy can be made with social security and health insurance. In most EU countries, these compulsory funds are also excluded from official government budget accounting, yet for all intents and purposes they behave like a tax.

B) The complexity is misdirected

The (English) rules exempt retailers of less than 250 employees. This may lead to arbitrary and costly legal sub-dividing retail branches. Furthermore, bags will continue being free if they are for fruits or meat, for example (but no other items can be put it). This will impose time costs on everyone as shoppers strategically buy several single apples to qualify for a bag, only to then rearrange their other purchases into these almost-empty bags.

Still, some of these exceptions do make sense. Take the “meat” exemption, for example. Single use plastic bags are the safest way of transporting meat, preventing contamination of it as well as by it. Paper isn’t really an option, and reusable plastic bags (which are generally preferred by governments) can create public health problems. After San Francisco became the first (US) city to implement a tax on single-use bags, there was a 25% increase in emergency room admissions related to e-coli bacteria infecting consumers who have not properly washed their reusable bags. (In addition, the very act of disinfecting the bag is environmentally unfriendly as it uses resources, especially heat.)

Anti-plastic arguments tend to only consider pollution “that is seen” but do not do full accounting. If the tax law wants to make special provisions, it should exempt those options which have the least total environmental cost. How does the single-use plastic bag stand compared to the alternatives?

As we grow richer, we rely on the market (and hence shopping) more and on household production less. (This reliance on the market is one of the reasons why we grew richer in the first place.) But that means having to carry more products “from the market”, hence the increased need for a carrying container.

However, the English system encourages those options which are even more environmentally harmful than single-use bags.

• Reuse is likely to be reduced. Shopping bags’ most popular second use is as domestic refuse collector (average bag is therefore used 1.6 times). The tax will do nothing to the amount of refuse, so if the household does not have enough accumulated shopping bags, they will buy black bin bags. Unless households will have used them for their shopping beforehand, this will reduce the rate of reuse of a resource.
• Paper bag production is more harmful. Compared to plastic, paper bag production consumes twice as much energy, creates 50 times more water pollution and produces 50% more global warming gasses.
• Paper bags worsen landfill emissions. Landfills may look prettier with paper bags, but what is not seen are their more harmful emissions (when they rot without oxygen). Landfill plastic is a form of sequestration of carbon underground, while decomposing paper produces methane, greenhouse gas 23 times more powerful than CO2.
• Landfill volumes may actually increase. After Austin, Texas banned single-use plastic bags, plastic volume in landfills increased as people started to throw away their rubbish in heavy-duty reusable bags. The customer has to pay for these, but the UK tax now makes them relatively cheaper and more demanded. Paper bags are also bulkier than single use plastics: in the US, although customers take 5x as many plastic bags than paper, in landfills paper bags make up more than 2.5x the volume of plastic bags.
• Cotton bags are also very harmful. Though popular with many environmentalists, the cotton needed for the bags’ production is very water- and pesticide-intensive. This often falls especially hard on poorer countries whose institutions do not shield as well their population from drought and bad chemicals.

Recycling should always be encouraged. But if governments want to use their tax policy towards the truly less harmful bags, taxes should discourage paper bags, not plastic bags. Especially when they are impractical to reuse and real world people do not properly recycle them. Just because their damage is less observable does not mean it isn’t there.

Many governments also care about wealth equality. Any bag tax, however, will increase inequality. The rich do not eat much more than the poor that they would buy more grocery bags; if anything, they consume less from supermarkets and more from bagless restaurants. 5 pence per bag may seem little to a government official, but for poorer families (who often make more separate trips to the shop, either because they are cash-constrained or cannot afford to drive there) it can accumulate rather quickly, depriving other sectors of their purchasing power.