According to The Economist, these turbulent times have completed the transformation of Britain into a new country, characterized by political instability and low growth, and subordinated to financial markets. Britaly is the name chosen to identify the new creature. By a twist of fate, it seems that the transformation accelerated during the short period in which Liz Truss was at 10, Downing Street. Some ten years ago, Ms Truss and her (first) chancellor Kwasi Kwarteng wrote a pamphlet titled «Britannia Unchained», where they pointed out at Italy – a country tortured by «clogged public services, low growth and low productivity» – as the example to avoid.

Ironically, low productivity and low growth have now become a frequent feature of the British economy, as well as political instability. As a result, financial markets are skittish. The comparison with Italy has become unavoidable.

The Brits were probably not very happy about the comparison. The Italians did not like it, either. The Italian ambassador to the UK complained to the magazine, since its cover – representing Liz Truss armed with a pizza shield and a fork with spaghetti – echoed old stereotypes. As the ambassador wrote: “Although spaghetti and pizza are the most sought out food in the world, as the second largest manufacturer in Europe, for the next cover we would suggest you to pick for a change from our aerospace, biotech, automotive or pharmaceutical sectors”.

Most likely, the provocative comparison made by The Economist aimed at making fun of the Tory leadership, not at discrediting Italy. Yet, the editor’s note did draw attention to the fact that «Between 2009 and 2019 Britain’s productivity growth rate was the second-slowest in the G7, but Italy’s was far worse. Britain is younger and has a more competitive economy. Italy’s problems stem, in part, from being inside the European club; Britain’s, in part, from being outside. Comparing the bond yields of the two countries is misleading. Britain has lower debt, its own currency and its own central bank; the market thinks it has much less chance of defaulting than Italy.».

Yet, although The Economist claimed that Britain has moved closer to Italy in recent years in three fundamental ways (political instability, subjection to the bond markets and low growth), the parallel between the two countries remains questionable.

A comprehensive and more consistent reading of the Editor’s note is thus the following: the Tories are driving the country along a path that leads to a disastrous Italy-like situation. However, and in contrast with the Italian situation, political instability in Britain is simply a one-party disease and growth depends on something that the Tories are currently unable to provide.

The Italians have reasons to see it differently

There is a key difference between the current Italian situation and the British one. Italy belongs to the European Union, Britain is out of it; Italy takes advantage of the single market and the customs union; Britain does not. Interesting enough, the once champion of openness and free trade – what made Britain great in the world – has embraced an outdated mercantilist perspective that is leading it to ruin.

As shown by a recent LSE Discussion paper, the 2021 Trade and Cooperation Agreement (TCA) governing UK-EU relations led to a dramatic drop in the number of EU-UK buyer-seller relationships relative to the rest of the world. These relationships are very difficult to replace with others involving non-EU subjects. At best, it can only happen in the very long run.

It is no surprise, then, that the sharp depreciation in the exchange rate of the Pound after the Brexit referendum failed to boost British exports. The current account balance (Fig. 1) – it indicates whether a country is either a net creditor (+) or a net debtor (-) to the rest of the world – has not performed particularly well after Brexit; Italy’s performance is much better. Moreover, the weaker pound has made imports more expensive. 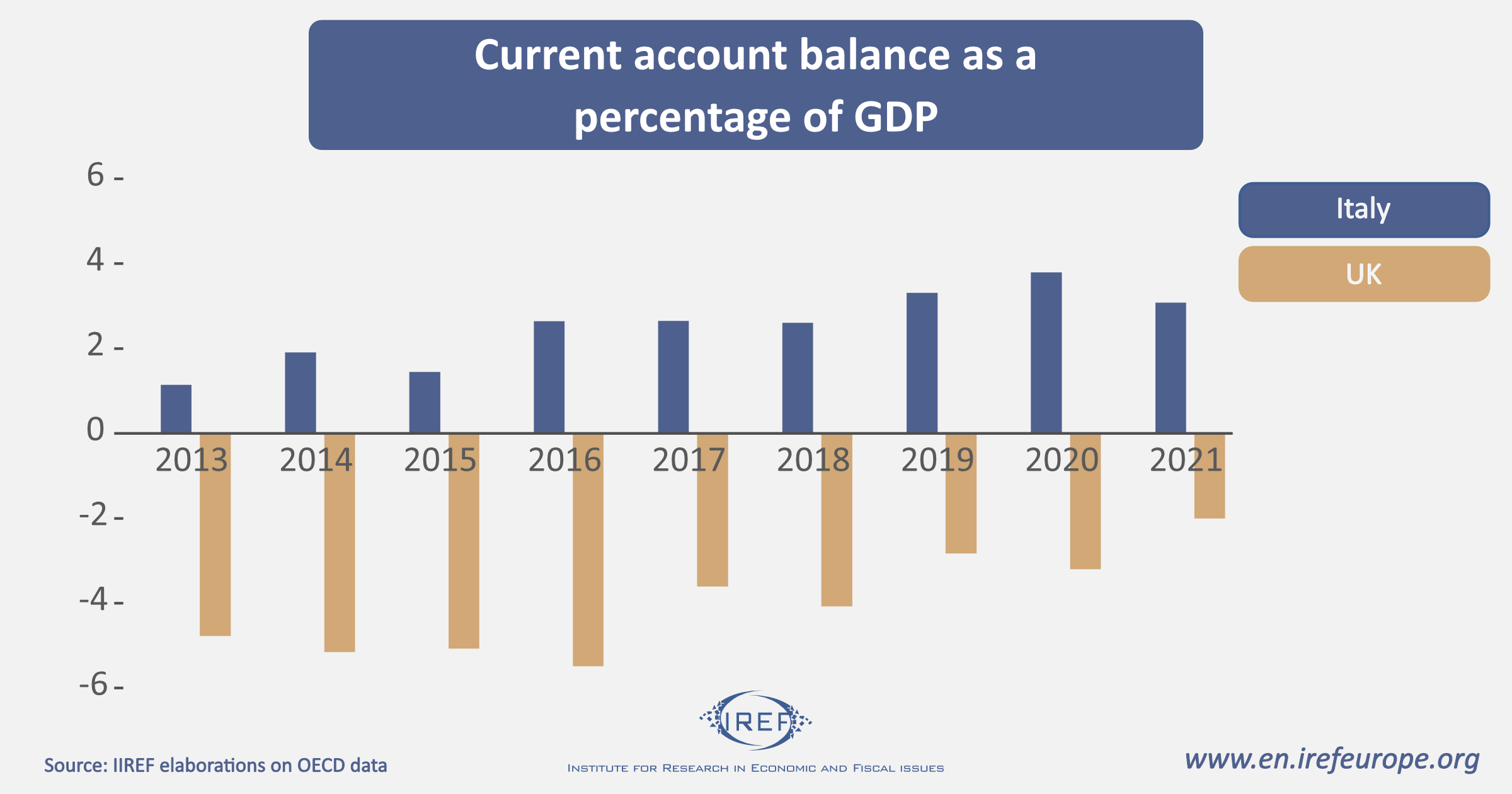 The Office for Budget Responsibility, the official British forecaster, still argues that Brexit will ultimately reduce productivity and UK gross domestic product by 4 per cent, compared with the no-Brexit scenario. Over half of that damage has yet to occur.

A clue of what is going on is provided by Fig 2, which shows that the advantage the UK had enjoyed until 2017 with respect to Italy in gross investments has now disappeared. This will have consequences in regard to future productivity and growth. 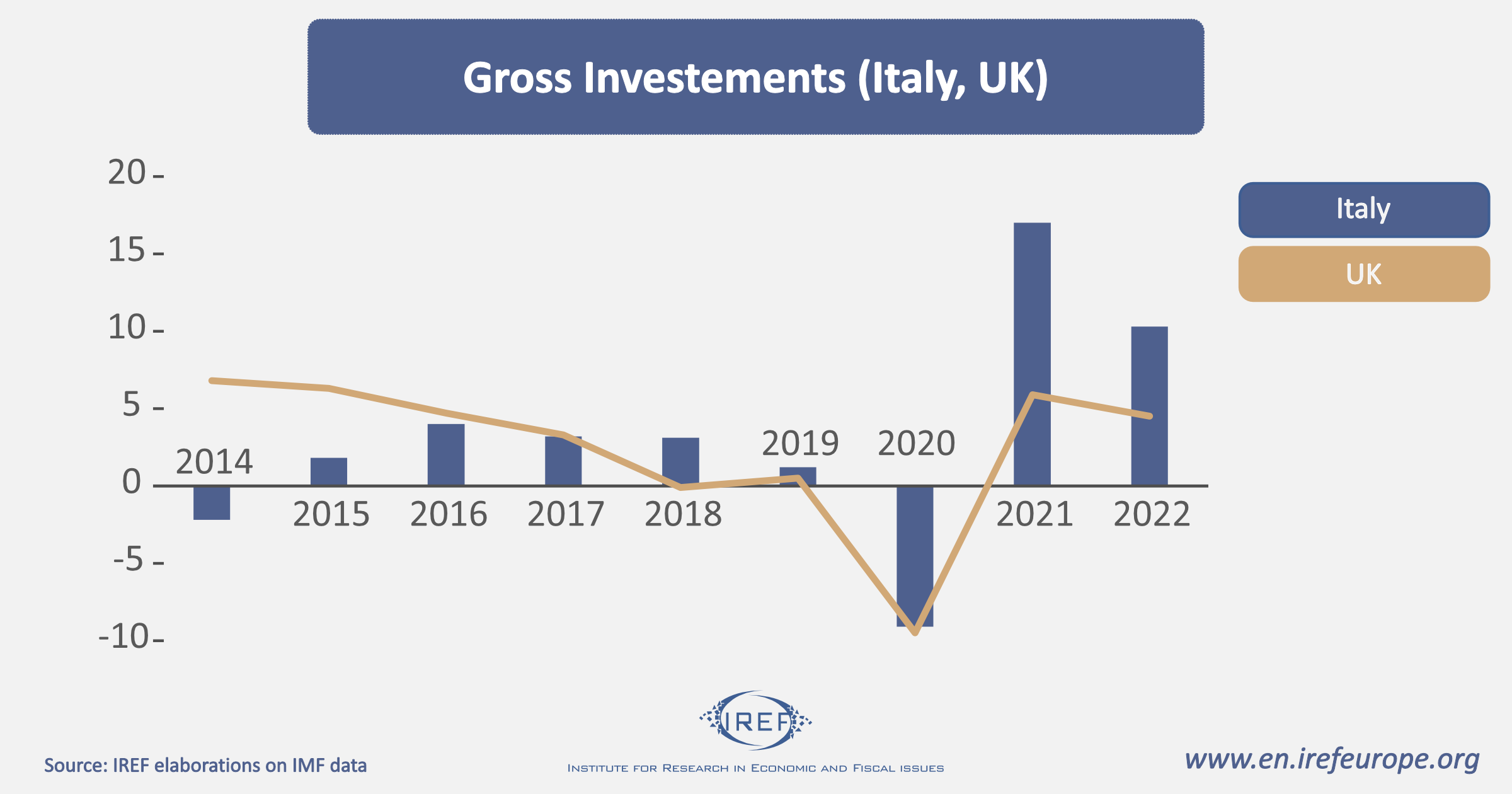 As a final point, consider public finance. Italy’s public debt is indeed huge.  However, if one looks at the General Government Deficit, Britain’s performance in the last fifteen years was much worse (Fig. 3). Fiscal discipline was perhaps not a priority even in Britain.

There is however one important reason that explains why the Italians can be more optimistic than the British: nearly 200 billion euro of EU money are on their way to Rome. It is the country’s share of the EU coronavirus recovery fund package: A big chance to stimulate investments and growth without increasing further its present public debt. It might also strengthen political stability, which is what Britain currently lacks. 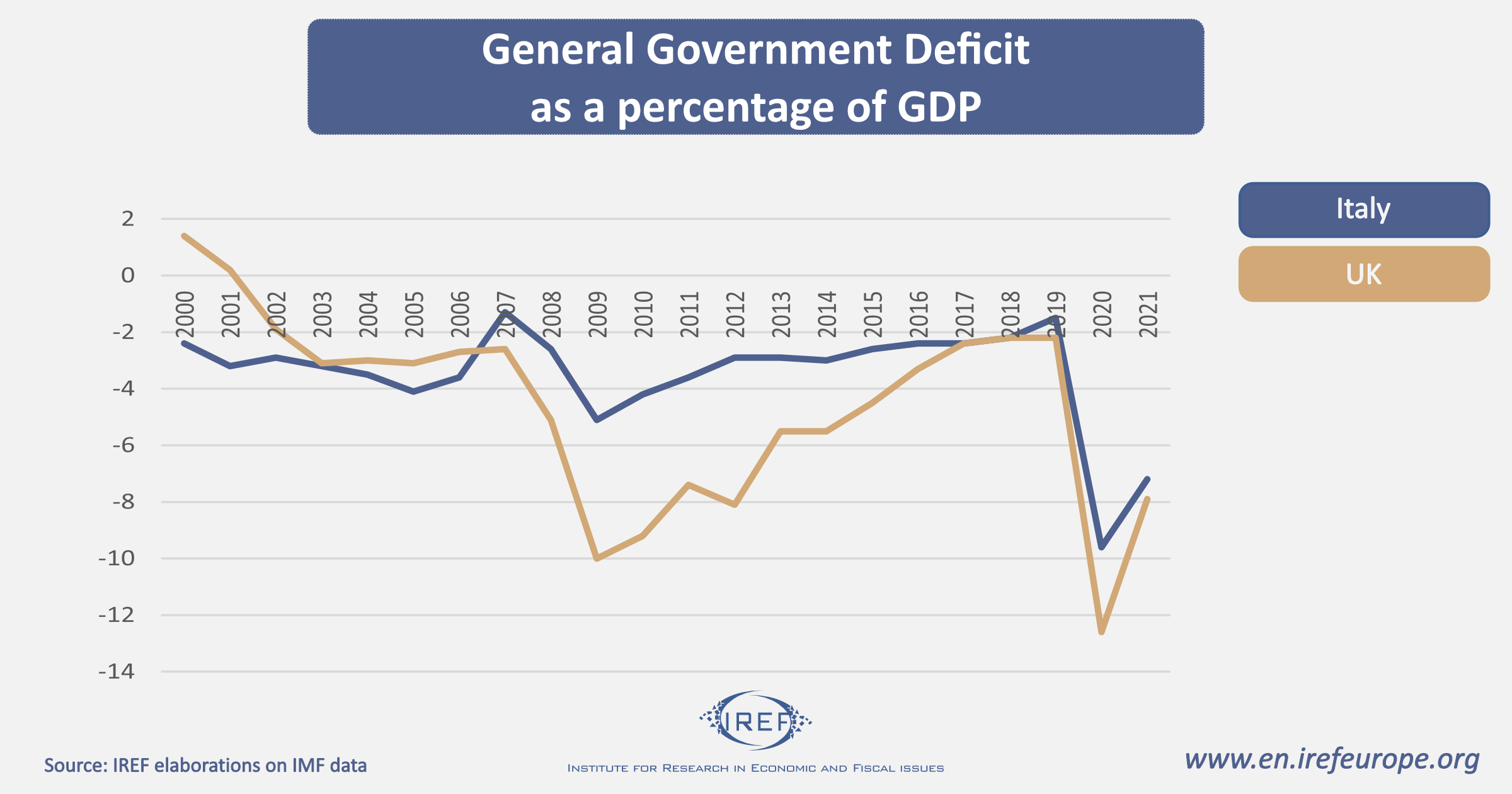