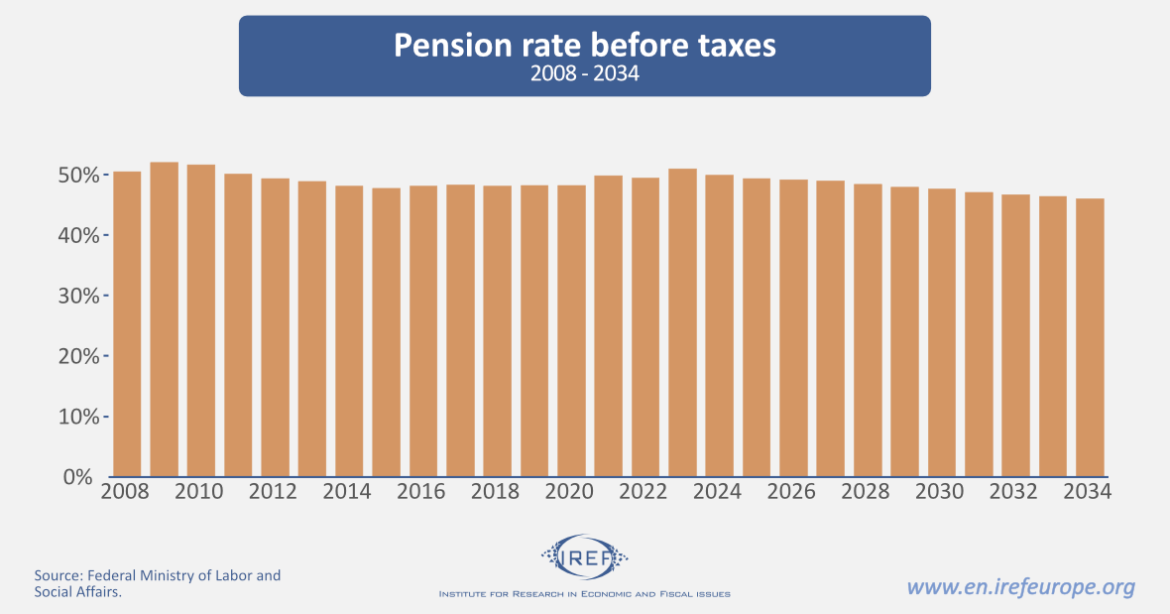 State pensions in Germany follow the pay-as-you-go system. That means that today’s pensions are funded directly by today’s working population. Although payments are made to the German pension system, these resources are spent immediately and will not be available when today’s worker retire.
The most important funding parameters in the pay-as-you-go pension schemes are the number of contributors and the number of receivers. The total amount of the pensions disbursed is largely determined by the age of retirement, by how much current retirees paid to the system during their working life and the criteria used to transform such payments into claims.
Of course, demography plays a crucial role. If younger generations get thinner, contributions drop and pensions suffer. This means that an aging population becomes source of trouble. Today, this is the certainly the case for Germany.

According to the current legislation, retirement age will be gradually increased to 67 years, i.e. three years more than retirement age in 2019. This will affect pensions in two ways: workers will work (and contribute) for a longer period of time, and receivers will benefit for a shorter period. Currently, only one political party promises to lower the retirement age. All the other parties do not question the timing already approved (67 years), but in some cases would not deny the possibility of allowing early retirement with lower pensions.

The conservatives (CDU) favour a gradual increase in the retirement age. The social democrats (SPD) want to follow through with the rise already agreed (from 64 to 67 years), but oppose further increases, and plan to maintain the current possibilities of earlier retirement without cuts in the annual benefits. The liberals (FDP) demand a flexible retirement scheme similar to the Swedish model. This should enable employees to retire from the age of 60, but continued employment would be incentivised through higher pensions. The far right (AfD) follows a similar approach, and plead for flexible retirement age combined with financial incentives for longer employment. The Green Party wants to keep a general retirement age at 67 while making it easier to retire early or to work beyond this age. The Left is the only party that demands to reduce the retirement age to 65 or to allow retirement with a full pension after 40 years of employment.

In the short term, the ratio between contributors and receivers does not depend only on the age of retirement. It can also be altered by changing the number of mandatory contributors. For example, self-employed people and civil servants can be included in mandatory state pension schemes, which is what the SPD, the Greens, and the Left Party demand. The number of payers can also be increased through immigration, like the Greens suggest. These measures cannot change the ratio permanently, however. In the end, the new contributors will also have their own pension claims in the future.

Parameter 3: The level of contributions

The level of contributions is the most obvious parameter to quickly fund higher pensions. In this light, the CDU and their allies (CSU) want to create an advisory board, the purpose of which is to make proposals to this effect. Although these parties do not make any concrete suggestions, they are inclined to letting contributors decide how much they want to pay (within limits). Similarly, the SPD argues for voluntary additional contributions within a PAYG framework.
The FDP wants to bring back the ‘catch-up factor’, a mechanism that would prevent further increases in contributions, while the Green Party, the Left and AfD want to increase budgetary transfers to support future pensions and reduce the burden on the contributors. In particular, the Left wants to abolish the Riester pensions (private pension schemes subsidised by the government) and use the resources thus made available to subsidise the state pensions.

The current pension rate is 49.8%. This is the ratio between the average net amount received by pensioners after 45 years of contributions, and the average net income of employees. This rate will increase from 2021 to 2023, due to a new way of calculating the pension level and does not affect the present level of pension payments. From 2024 onwards, however, the ratio will decrease and follow a trend that started in 2009.

A lower pension rate does not necessarily imply that pensions decrease. If wages increase fast enough, then pensions will rise. This is what all parties in the Bundestag are hoping. Yet, the SPD and the Greens have made it clear that the pension rate should not fall below 48%. The FDP does not give concrete numbers but aims to increase the rate in the long run by introducing a stock-market related pension scheme. The Left demands an immediate increase to 53%. The AfD does not have any concrete suggestions.

The proposals for reform suggested by the various parties are not suprising. All parties want to prevent a reduction in the pension rate, and they all refrain from suggesting a further increase in the age of retirement or in the size of contributions.

Yet, limiting the retirement age while keeping contributions constant will not be easy. An increase in the subsidies financed through taxation, as suggested by the Left, AfD, and the Greens, will not make the system more sustainable. It merely shifts the financial burden from contributors to taxpayers. Indeed, the Social Democrats, the Greens and Left demand an extension of the pay-as-you-go system to cover additional groups. But although this may temporarily help to raise the number of contributors, it does not improve the ratio of payers to receivers in the long run.

The truth is that no party dares to announce significant changes in the most important parameters of the unfunded system. Nonetheless, demographic changes and the resulting need for more pension resources will make significant adjustments inevitable. 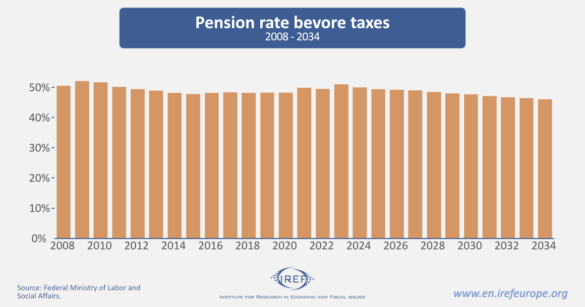 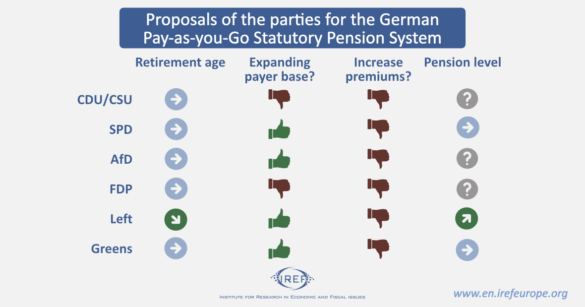 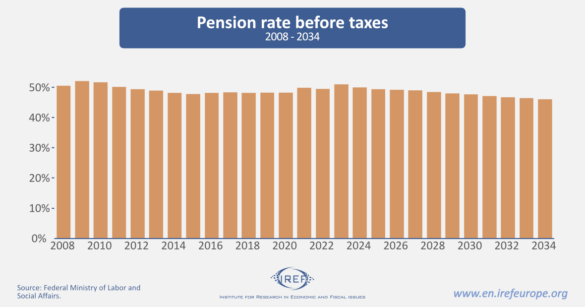